Scroll down to Discover

Today, the “929 Global Anti-Totalitarianism March” was organised in many regions around the globe such as USA, UK, Australia, France, Germany and Taiwan. In Hong Kong, protestors gathered at 2:30 PM and began marching at 3:00 PM on Hennessy Road outside of SOGO in Causeway Bay towards the Central Government Complex in Admiralty.

【13:00】 Officers were carrying out stop-and-search on people in black outside of World Trade Centre. The photo shows 3 who were searched and taken away.

【13:42】 Police officers were guarding every entry of Wan Chai Station, and there were also around 20 on the platform towards Chai Wan.

【14:15】 Outside of SOGO, the police and protestors were in stand-off. Officers pointed their batons and peppery sprays at protestors. One of the middle aged protestors argued with the officers and was dragged into the defence line, pressed onto the floor and locked up. His clothes was scratched.

【14:25】 Multiple rounds of tear gas were fired. Some citizens and officers without gas masks were affected.

【14:30】 Some medical professionals had planned to host the “929 Humanitarian Rescue Pledge Ceremony” outside of the World Trade Centre, but police set up a cordon before the ceremony which prevented entry for new joiners.

【14:57】 Protestors began to march from Causeway Bay towards Wan Chai. Meanwhile, multiple helicopters were spotted above.

【15:20】 National flags of multiple countries were seen in the hands of protestors to signify the global nature of this anti-totalitarianism campaign.

【15:30】 Banners celebrating Chinese national day was sprayed on by words of “Liberate Hong Kong”. PRC was crossed out.

【15:47】 Blue flag was raised on Queensway, warning the use of force against what they claimed “unlawful assembly”.

【15:50】 A section of Harcourt Road outside the LegCo complex was occupied by protestors.

【16:25】 Jets of blue water was fired out of a water cannon truck towards Harcourt Road. Officers also short tear gas from the top of the Central Government Complex, but there were actually no protestors to be seen.

【16:40】 In Tim Wa Avenue outside of the government complex, protestors tossed multiple petrol bombs, but the fire was extinguished by water jets.

【16:50】 An Indonesian journalist was shot in the right eye by an alleged beanbag round (some sources say rubber bullets) and immediately collapsed. First-aiders rushed to her side and ambulance arrived at around 5 PM. The journalist was conscious when escorted away. 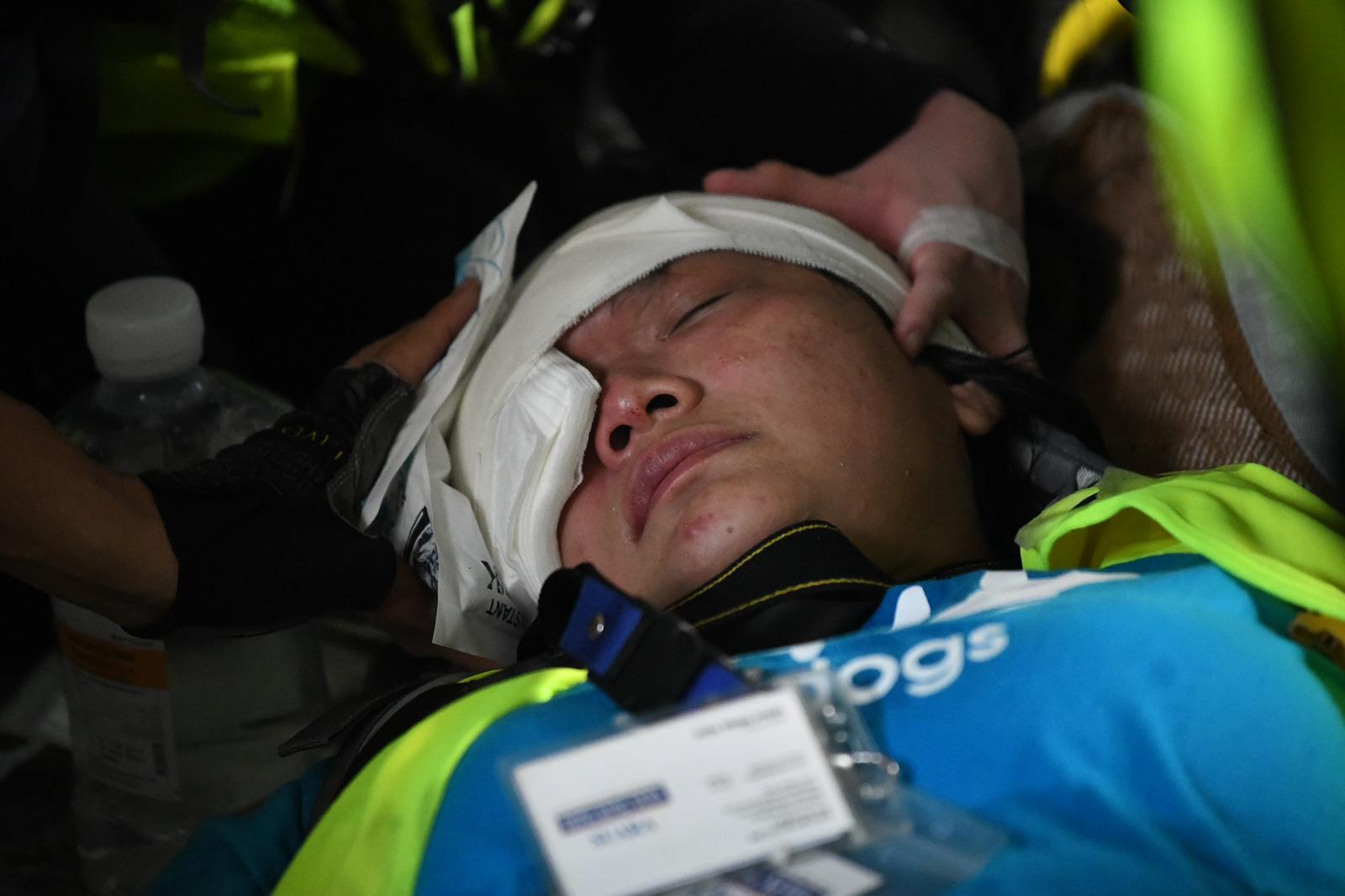 【16:53】 A team of riot police rushed to the Harcourt bridge and a young man was clamped to the ground. Some officers used pepper spray in close distance despite the man being already subdued. They even covered his mouth to muffle his voice, preventing him from shouting out his name to journalists. At the same time, another young man was tied, but he seemed to have already lost consciousness. Officers had searched his belongings while he was unconscious, meaning he was vulnerable to deliberate evidence planting.

【17:00】 Guardians of Children formed a human chain in front of Admiralty Centre in attempts to buy time for the protestors to escape. 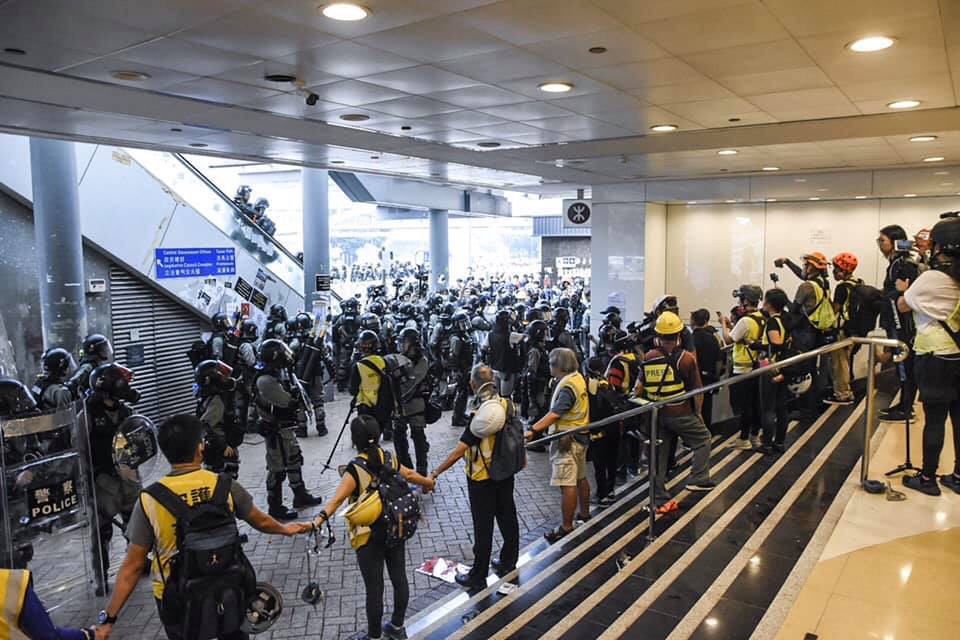 At the same time, 2 firemen and some civilians pulled up a gate to let protestors climb through. Police then surrounded the firemen, asking them to explain their action. They responded they were trapped so had to be rescued from risks of danger.

【17:31】 Police suddenly started to push forward on Queensway, beating and subduing at least 30 people. Some were injured and required first-aid, while one lost consciousness and had to be fitted with oxygen mask.

【17:31】 Around 5 undercover officers took out their batons to beat civilians, so dozens of protestors gave chase and surrounded the impostors. One of them suddenly fired one live round. Shocked, the protestors screamed “gunshot!”, and immediately dispersed.

【17:50】 A barricade outside of Chinese Methodist Church in Wan Chai was set on fire.

【18:40】 Things were burning in multiple locations in Causeway Bay.

【18:50】 At night, protestors had retreated to Causeway Bay and set more things on fire. Police fired water cannon in response.

【19:43】 At least two men were arrested outside of the Hong Kong Cricket Club in Wong Nai Chung. Volunteers of Guardians of Children were stopped and investigated as well.

【19:50】 Police continued to stop and search civilians under the Circular Footbridge at Yee Wo Street.

【20:05】 Black flag was seen outside on Hennessy Road, warning the use of tear gas, again. 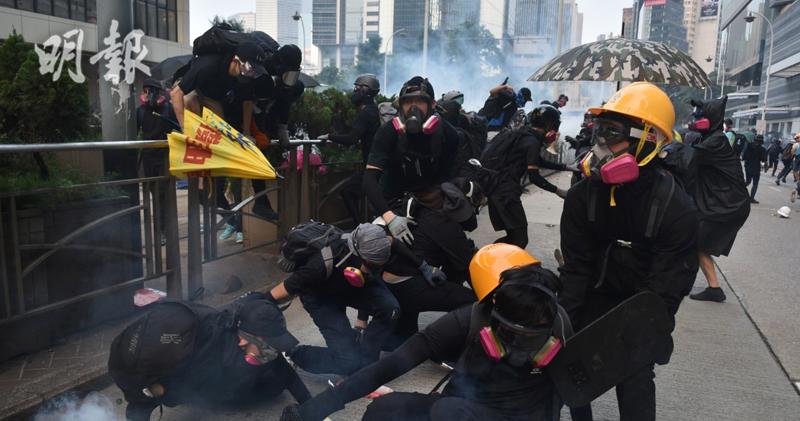